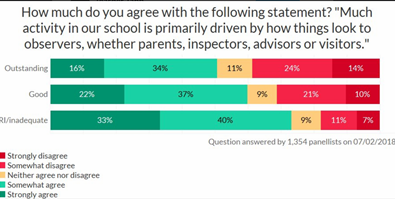 Several people objected that this is a just a cross-sectional correlation and I therefore cannot justify this conclusion based on this graph. I agree. It might be a spurious correlation or indeed reverse causation. At the very least, you need longitudinal data to support that kind of interpretation. But I am not basing my interpretation on just this graph. I am basing it on this graph plus the academic literature. So, throwing off the character limits imposed by twitter, here is the rest of the evidence on which my interpretation is based:

First, this is not the only finding of a cross-sectional correlation between Ofsted grade and teacher workload. The nationally representative TALIS 2013 data shows that teachers working in Good or Outstanding school spent 82-84% of their time teaching, while those in RI schools spent 77% and those in Inadequate schools spent 75% of time teaching (Micklewright et al., 2014). The 2016 teacher workload survey also came to a similar finding (Higton et al., 2017).

In addition, a range of small-scale longitudinal studies have shown that workload increases with inspections, within schools. Male (1999) reports a one-year prospective longitudinal survey of teachers in a single inspected school. The results show that mean hours worked and the proportion of teachers working atypical hours increased in the run-up to the inspection. The proportion reporting atypical working hours did not fall back to pre-inspection levels in the immediate aftermath of the inspection. Case, Case & Catling (2000) report on a detailed, three-year, prospective qualitative study in three inspected schools. They find an increase in workload around the time of the inspection, particularly paperwork and documentation. Jeffrey (2002) reports on a 1.5 year, prospective longitudinal qualitative study in six schools, finding an increase in workload around the time of inspections. Chapman (2002) discusses ten retrospective case studies of inspected schools, finding that teachers “at all levels” reported that inspection contributed to workload. Perryman (2009) reports a detailed, two-year, prospective, longitudinal study of a single inspected school, finding a marked increase in workload in the build up to the inspection. Courtney (2016) reports a retrospective survey of 36 headteachers in recently inspected schools and reaches similar conclusions, adding that the introduction of a new inspection framework has prompted additional work as heads update and revise documentation. Taken together, this research provides good evidence that inspection precedes workload, rather than workload preceding inspection.

This evidence does not, however, rule out spurious correlations. Perhaps a third variable, such as leadership, is causing both increase workload and low Ofsted judgements? Again, I would argue that this is implausible based on the existing evidence. In the government’s 2016 workload consultation 53% of a (non-random) sample of respondents cited ‘accountability/perceived pressures of Ofsted’ as a driver of their workload burden (Gibson et al., 2016). Similarly, in TALIS 2013, 85% of respondents reported that ‘accountability (e.g. Ofsted, performance tables)’ adds significantly to the pressure of their jobs. This self-report survey evidence is corroborated by qualitative research, which illuminates the mechanisms through which Ofsted increases workload. Case et al (2002), Jeffrey (2002), Plowright (2007), Perryman (2009), Courtney (2016) and Perryman et al (2018) all come to the same finding: Ofsted increases workload because teachers have to dedicate time to generating the type of paper-based evidence that inspectors can consume during a visit, such as schemes of work and data. As one teacher put it, “There was an obsession with recording everything in writing so you could prove that you’d done it… Something that might normally have been just a practical activity had to have some element of it written down” (Case et al., p. 616). Notice that the additional work here is separate and additional to the activity of educating pupils. Rather, it aims to make activity visible to people not present at the time.

Interestingly, the advent of short-notice inspections appears to have changed the way in which inspection creates workload, because schools maintain a constant state of readiness for inspection (Perryman et al., 2018; Allen & Sims, 2018). As one teacher interviewed in our book explained “There is so much work I could pinpoint over the past seven years that was just done for Ofsted and has since gone in the bin because it hasn’t been needed. It was always just-in-case” (Allen & Sims, 2018, p. 93). A review of the literature on inspection found that this sort of over-documentation is a common side effect of school inspection systems across countries (de Wolf & Janssens, 2007).

None of the studies cited here would individually support my interpretation of the graph. Taken together however, they provide weight of evidence for the interpretation that Ofsted prompts RI and Inadequate schools to spend more time engaged in educationally useless activity in order to produce auditable material for inspectors. At present, it is hard to determine the amount of additional workload involved. Returning to the Teacher Tapp graph, 77% of respondents in RI/Inadequate schools and 50% of those in Outstanding schools report that “much” activity is driven by how things look to observers, including Ofsted. It is also noteworthy that, of the 7.4 extra hours that teachers in England spend at work each week compared to their international counterparts, the bulk is attributable to administration, management, marking and planning (Sellen, 2016); though of course, we do not know how much of this is attributable to the inspection system. Precisely quantifying this would require longitudinal teacher survey data including workload measures, preferably collected using complete weekly diary methods. Fortunately, the DfE are currently considering the business case for such a study. This will provide a more complete evaluation of the costs of the current school inspection model, to be weighed against the benefits.

Perryman, J. (2009). Inspection and the fabrication of professional and performative processes. Journal of Education Policy, 24(5), 611-631.

Education researcher interested in how we can build teaching capability in schools. I do my research at UCL Institute of Education and the Education Datalab. View all posts by samsims1